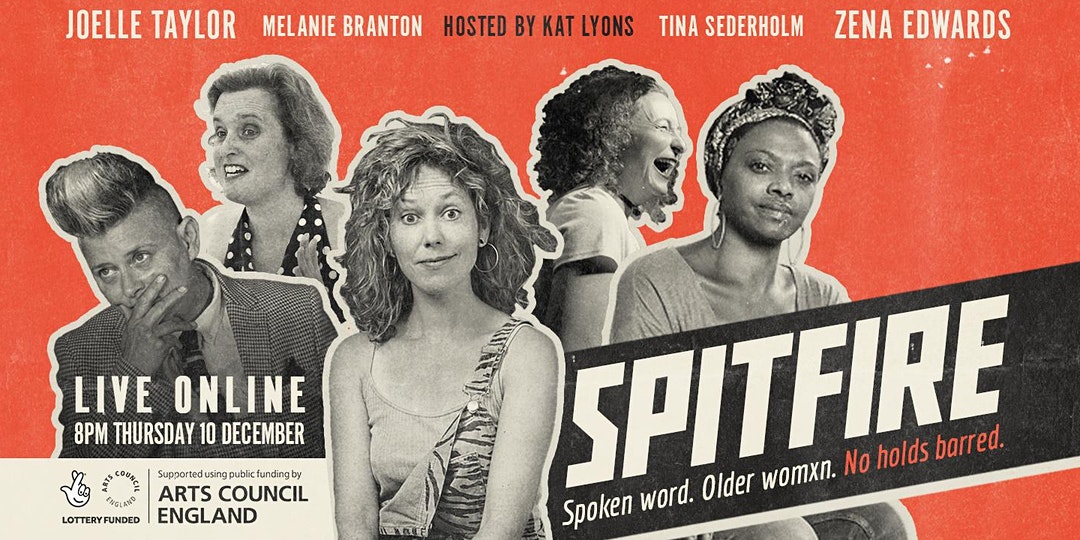 Join us online from the comfort of your own home to celebrate the talent, voices and diverse experiences of older womxn.

SpitFire is a night for everyone, from people who love spoken word to those who have never set foot in a poetry event.

This event will take place on Zoom and you will need an internet connection to access the performance. We will be using the Webinar function so you can watch the event in comfort knowing that you won’t be seen on camera.

This event will be captioned for accessibility.

SpitFire is funded and supported by Arts Council England

A Note On Ticket Types:

There are 3 ticket prices available:

Concession tickets are available to anyone who self identifies as needing access to a reduced price ticket. Pay It Forward tickets are a way for people to subsidise a concession ticket. Eventbrite booking fees are on top of the face value ticket price shown above.

Joelle Taylor is an award-winning poet, playwright, author and editor who has recently completed touring Europe, Australia, Brazil and South East Asia with her latest collection Songs My Enemy Taught Me. She is widely anthologised, the author of 3 full poetry collections and 3 plays and is currently completing her debut book of short stories The Night Alphabet. She has featured on radio and television, and founded SLAMbassadors in 2001 – the UK’s national youth slam championships remaining its Artistic Director until 2018. Her work is taught as part of the English GCSE syllabus, and she has received a Change Maker Award and a Fellowship of the RSA, as well as being longlisted for the Jerwood Compton Poetry Fellowships. She is the host and co-curator of Out-Spoken, the UK’s Centre’s premier poetry and music club, currently resident at the Southbank Centre Purcell Room.

Raised in Tottenham, North London, Zena Edwards has become known as one the most unique voices of performance poetry to come out of London.

Zena has been involved in performance for 25 years – as a writer/poet performer, facilitator, creative project developer and vocalist after graduating from Middlesex University. She studied storytelling and performance at The London International School for Performing Arts and is published in several anthologies including Margaret Busby’s Daughters of Africa, Second Edition and Dance the Guns to Silence (Flippedeye publishing).

As a poet, Zena has travelled extensively round the UK, the US, Africa and Europe collaborating with artists such as Nigerian choreographer Qudus Onikeku and award-winning visual artists, Theaster Gates and toured supporting living legend Hugh Masekela, the Last Poets and Babaa Maal. She has shared the stage and anthologies with some of her most admired predecessors Linton Kwesi Johnson, Sonia Sanchez, Lemn Sissay, Jean Binta Breeze and Roger McGough.

Melanie Branton took up spoken word at the age of 46 and her eclectic work, which ranges from quirky, off-kilter comedy to gut-punchingly candid confessional, has always had a strong focus on society’s marginalisation of older women, working-class women, and single, childless women.

She has performed at spoken word nights the length and breadth of the country, as well as at the Edinburgh Fringe and at festivals including Womad, Shindig and the Bristol, Exeter and Wolverhampton poetry festivals. Her published collections are Can You See Where I’m Coming From? (Burning Eye, 2018) and My Cloth-Eared Heart (Oversteps, 2017) and her work has appeared in numerous journals, webzines and anthologies.

Tina Sederholm is a performance poet and theatre-maker. Described as ‘Completely spellbinding’ ***** (Edfringe Review) and ’Stunning’ ***** (Three Weeks), she has created four one woman shows that have toured extensively, including six runs at the Edinburgh Fringe. Winner of more than 20 slams and the author of six books, including Everything Wrong With You Is Beautiful, her work explores the modern pressures that disrupt our true longings. She is currently working on a new show, REST, and another poetry collection called This Is Not Therapy.

Kat is a Bristol-based poet and performer. They host with spoken word promoter Raise the Bar, won the 2019 Lyra: Bristol Poetry Festival slam, have been published in Under The Radar and Ink Sweat And Tears and perform at festivals and events around the UK. They are currently developing Dry Season, a solo spoken word theatre show exploring gender, age and menopause, and have a debut collection forthcoming in 2022 from Verve Poetry Press. Their poetry mixes serious subjects with a light touch, exploring themes as diverse as mass extinction, ageing, the #metoo movement, and grief-induced bad haircuts. They believe that poetry is relevant to everyone, and that everyone has a story to tell and a voice worth hearing.