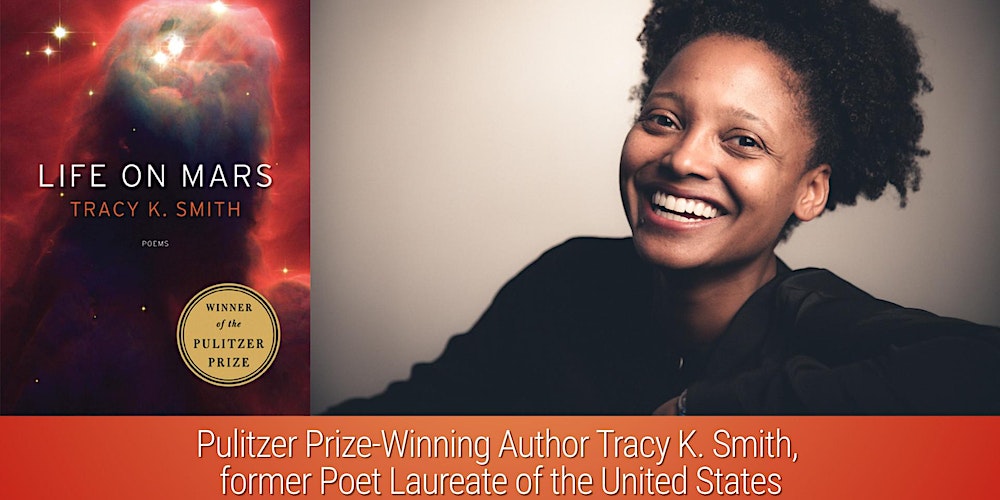 Please join us for a stirring evening of poetry by Pulitzer Prize-winning author Tracy K. Smith, former Poet Laureate of the United States. This poetry reading will be moderated by Professor Cole Morgan (UCI English). This event supports our year-long theme, “For a more perfect union?” and contributes to campus-wide discussions of wisdom in the world.

Tracy K. Smith received the 2012 Pulitzer Prize in poetry for her third book of poems, “Life on Mars.” The collection draws upon the genre of science fiction in considering who we humans are and what the vast universe holds for us. In poems of political urgency, tenderness, elegy and wit, Smith conjures version upon version of the future, imagines the afterlife, and contemplates life here on earth in our institutions, cities, houses and hearts. “Life on Mars” was a New York Times Notable Book, a New York Times Book Review Editors’ Choice, and a New Yorker, Library Journal, and Publishers Weekly Best Book of the Year. Her other books include “The Body’s Question,” “Duende,” and “Ordinary Light.”

Smith served two terms as Poet Laureate of the United States, during which time she traveled across America, hosting poetry readings and conversations in rural communities. She edited the anthology “American Journal: Fifty Poems for Our Time” during her laureateship, and launched the American Public Media podcast The Slowdown. In March 2021 she was voted into the American Academy of Arts and Letters. Smith is the Roger S. Berlind ’52 Professor in the Humanities at Princeton University, and Chair of Princeton’s Lewis Center for the Arts.

Co-sponsored by the UCI Humanities Center, Advisory Council on Campus Climate, Culture and Inclusion, and Office of Inclusive Excellence.